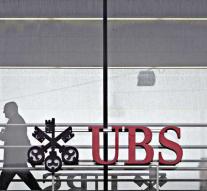 paris - The Swiss bank UBS received a fine of more than € 3.7 billion in a French tax and money laundering case. The company must also pay out € 800 million in damages to the French...

According to the judge, the financial group has helped thousands of French people 'systematically' to evade tax by putting the money on secret Swiss bank accounts. That happened between 2004 and 2012. How much capital UBS helped to hide in those years is unclear: the estimates range from 8 to 23 billion euros.

The judge called the actions of the Swiss bank 'criminal and of an exceptionally serious nature. '