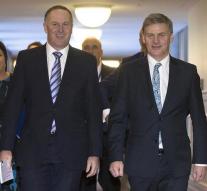 - Bill English on Monday (local time) chosen by the New Zealand government party as the new prime minister of the country. He replaces the previous week stepped up John Key who resigned due to family reasons.

English was deputy prime minister and finance minister. He was seen as leading candidate after the surprising resignation of Key. The experience got premier announced that more than eight-year premiership is demanding for 'those who are dearest to me. '