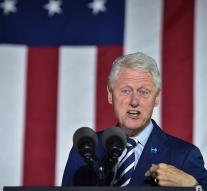 new york - Bill Clinton, former president of the United States, is writing an exciting story that has to be published in book form in 2018. That reports the intended publisher of the book on Tuesday.

Clinton (70), American president from 1993 to 2001, writes the book together with thriller author James Patterson. The book is entitled 'The President is missing'.

According to the publisher, the thriller is described as 'a drama that takes place in the highest circles of power'. According to Clinton, the book itself states 'certain details that only know a president of the United States.'

Whether the story is fictional or truth-based was not said. Financial details about the book deal were also not disclosed. Patterson (70) is especially famous for his fictional thrillers in which psychologist Alex Cross plays the lead. According to the Forbes magazine, Patterson earned only 87 million euros in 2016 with his books.