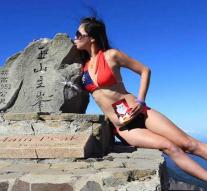 taipei - A self-proclaimed 'bikini climber' has died tragically. She would have been frozen after a fall of twenty meters, Taiwan's media reported.

Gigi Wu always placed photos on social media of herself- scantily dressed in bikini- on high peaks. But this weekend it went horribly wrong when she was on her own. The 36-year-old woman fell twenty meters down a valley in Nantou, a region in the middle of Asian Taiwan. She was already on her own at the time for eight days.