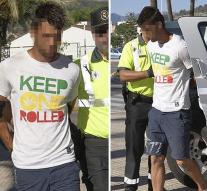 oliva - A 25-year-old Dutchman has been arrested because he is suspected of having a cyclist killed on a Spanish road under the influence of drugs. Then he would have fled. That informs the Spanish authorities.

After the accident in the Spanish city of Oliva, where a 30-year-old cyclist died, the driver drove off. The 25-year-old Dutchman was detained by Guardia Civil when he tried to flee. The man has Dutch nationality, but lives in Ondara, in the province of Alicante.

The Spanish cyclist of thirty years was the son of a local policeman, reported the Spanish newspaper El Mundo.

Research has shown that the arrested Dutchman had used drugs, reports authorities to the Spanish news site El Mundo.

Also, a blow test would have shown that he had drunk, he blies 0.21 milligrams of alcohol per liter of exhaled air, which may be up to 0.25 milligrams. That reports news site Las Provincias.

In Spain, the debate about drinking behind the wheel was re-inflated after the second deadly accident the driver had drunk. Voting for a total ban on driving with alcohol.

It's not even the first time a cyclist dies on this particular road at Oliva. At the beginning of May, three cyclists died on the same road after being injured by a motorist who was also affected by drugs and alcohol.