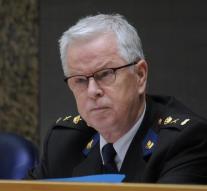 - Ruud Bik stops November 1 when plate deputy chief of the national police. Bik held that post for five years, but think it's time to make room for a new generation. Bik was the deputy police chief Erik pole, which took office in March.

In a statement Bik says it's a natural time,, '' to stop. He accompanied pole as the new police chief and now that has been completed will Bik start thinking about his future. That future still lies with the police, is not excluded.,, If possible I want to make love to me useful for police, because my blue heart beats unabated, '' says Bik.

Boom goes missing Bik.,, We will not find a second with so much experience, knowledge of the files, work ethic and dedication to the police profession. ''