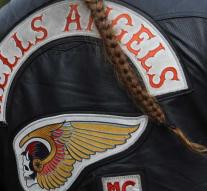 lisbon - In a major police action against the motorcycle club Hells Angels in Portugal, more than thirty arrests have been made. The police entered the eighty houses on Wednesday. More than four hundred cops and an anti-terror unit were involved in raids across the country.

The arrests follow large-scale research into the international activities of the Portuguese section of the motorcycle club. According to the police, a number of members are 'extremely dangerous' and have been involved in organized crime for a long time, and an attack on a rival gang in the vicinity of Lisbon is being investigated: several people were injured in a restaurant attack in March.

The raids are a week before a major motor meeting in Faro, which is held annually. The engine measurement usually attracts thousands of motorcyclists from all over Europe.