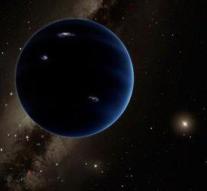 - Far beyond Pluto, on the outside of our solar system, is possibly another planet. There has long been talked about, but two US scientists say they have new evidence. They explain it in the latest edition of the leading science magazine The Astronomical Journal, which was released Wednesday.

Our solar system has eight planets: Mercury, Venus, Earth, Mars, Jupiter, Saturn, Uranus and Neptune. Pluto was valid until 2006, as a planet, but is now called a dwarf planet. Pluto is behind the so-called Kuiper belt, named after the Dutch astronomer Gerard Kuiper. The belt consists of billions of boulders. These rocks appear in groups to revolve around the sun. These groups can be explained by the forces of the mysterious planet, says Konstantin Batygin and Mike Brown of Caltech University.

'Planet Nine 'would be about ten times as heavy as the earth should be somewhat lighter than Uranus and Neptune. He should be about twenty times as far from the Sun as Neptune. A year there lasts over 10 000 to 20 000 years. The potential planet itself has not been seen yet and there is still more research is needed, scientists say