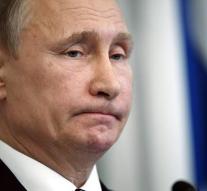 washington - The US Senate voted by a large majority for new sanctions against Russia, Iran and North Korea on Thursday. The new package of measures was voted by 98 votes to two against the Senate, although President Donald Trump has objections to sanctions.

The sanctions package was launched by the House of Representatives by a large majority earlier this week. The bill is sent to the White House, where the president can sign or veto it. This is the first major bill on Foreign Affairs of Congress under Trump. Even if Trump were to decide to veto it, it is expected that the proposal will get enough support in both rooms to override the veto.

The new sanctions put pressure on American-Russian relations. These had already deteriorated during President Obama's regime. Trump hoped to improve relations with Russia, but his government is so far overshadowed by investigations into Russian interference in the 2016 US elections in favor of Trump.

Russian President Vladimir Putin said Thursday before the vote in the Senate already that Russia is forced to take retaliatory measures when Washington continues with what he called 'illegal new sanctions' against Moscow. 'We exercise restraint and patience, but at some point we will have to retaliate. It is impossible to endlessly tolerate this turmoil against our country, 'Putin told a press conference in Finland.