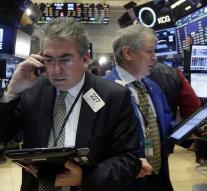 - The stock markets in New York were Monday in afternoon trading deep in the red. As in Europe, economic concerns were seized for a firm sale, which mainly financial companies and tech funds were hit hard.

,, The market is very nervous, '' said the head of equity strategy at BNP Paribas Bloomberg.,, It is again the same concerns: China, oil prices and the confirmation of those concerns in economic data. ''

Goldman Sachs was down the list of thirty main funds in the Dow, with a minus of 6.5 percent. Banking stocks, however, were across the board from grace, which manifested itself in exchange losses of 3 to 7 percent for Citigroup, Bank of America, JPMorgan Chase, Wells Fargo and Morgan Stanley.

Many tech and Internet stocks turn negative line by Friday. Twitter declined while with a min of 3 percent to its lowest level since the introduction on the stock exchange in 2013. Internet Favorites Facebook and Amazon yielded about 5 percent. For the weekend, many Internet stocks, including the big winners of 2015, even if done massively rejected.

Also in the energy sector were handed back blows. Gas company Chesapeake saw evaporate a third of its market value, after reports that it has taken consultants for restructuring in the arm. The company denied on Monday that is driven to bankruptcy.

The price of a barrel of American oil went down by 3 per cent to $ 29.97. Oil Concerns Chevron and Exxon Mobil, however, escaped the slump and were pluses marked by nearly 1 percent.

Toymaker Hasbro was also a positive exception with a gain of 1.2 percent. The company has its sales and profits last quarter managed to increase significantly, mainly due to strong demand for toys around the films Star Wars and Jurassic.

The euro was Monday at the start of the evening worth 1.1175 dollars against 1.1180 dollars at the close of European stock markets earlier in the day.