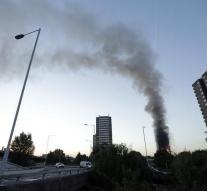 LONDON- In London, on Wednesday, a fire broke out in a large 27-storey building on Wednesday. The BBC's images show how the tower is completely on fire.

The fire rages in a flat on Latimer Road in West London. The fire brigade has been erected with about 40 fire trucks and two hundred firemen. According to the police, the building is evacuated and 'a number of people are being treated for a series of injuries'.

According to eyewitnesses people are still stuck in the building by the blazing fire.