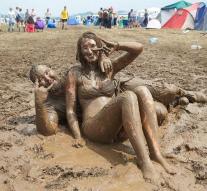 - The German festival Rock am Ring has been shut down Saturday. According to the organization is the impending storm near Koblenz too great a risk to safety. Friday 51 people were injured in a lightning strike. Fifteen festivalgoers are serious condition.

According to the organization viewed the situation from hour to hour. Visitors are urged to wait for the situation in their car or at one of the festival campgrounds. 'If the forecast remain as they are now, the festival is unlikely to continue at all,' said a spokesman. The organization hopes that the evening program, including the large crowd Red Hot Chili Peppers, but can continue.

The festival, with 90. 000 visitors, is held in Mendig, near Koblenz. Last year were at Rock am Ring 33 people injured by lightning.