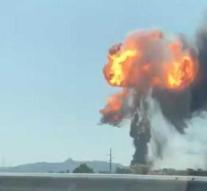 bologna - The Italian city of Bologna is frightened by a major explosion near the airport of that place on Monday afternoon.

It appears, according to Italian media, that a tank truck, a truck in which, for example, fuel is being transported, has exploded. This happened after an accident on the road, according to news site ilrestodelcarlino. it multiple cars have exploded.

The explosion is clearly visible on images on social media. There are also many photos and videos shared of the huge plume of smoke hanging above the place.