Home / Tech / Big dreams for the future on the IJ 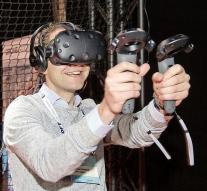 amsterdam - The future region down Wednesday in Amsterdam. He came up with robots, more or less self-propelled cars, 3d printers, flying cars and speakers who explain what all would lead to new technology.

Technology is developing exponentially and that is a good thing, the message was by DFT and SingularityU organized Get into the Future event at the theater located at the IJ in Amsterdam. A company or an equivalent organization that does not anticipate that puts its own future at stake.

The stamp of SingularityU, the Dutch branch of the California Singularity University, on the future theme emerged in the emphasis on technology, and in particular 'solving social issues through the lens of technology,' as in the opening session was named.

Thus unfolded the researcher behind the first of cultured meat cooked hamburger in the world, Professor Mark Post, how we can continue to feed the growing world population without anyone having to be vegetarian. Daan Kerstens, CEO of the Eindhoven 3D metal printer Additive Industries, the 700 professionals in the audience took in new capabilities and organizational models for the manufacturing industry, while mobility expert Carlo van de Weijer entered on the mobility issue with whether a license remains long overdue.

With the new age come new opportunities, including shopping carts that our mane walking in licorice shelf because they know our blood pressure, but also new threats. Cybercrime is a major global industry, demonstrated cybersecurity expert Melanie Rieback.

The coming together of several speeding technological developments, however, makes particular juncture the best time to live in, argued Yuri van Geest, co-author of the worldwide bestseller Exponential Organizations. We continue through technology not only longer-and maybe once or eternity healthy but are also, produced by technology pampered during that longer life. He shares with the Eindhoven professor system and control Maarten Steinbruch the opinion that in the future a working week of an hour or twenty is enough for the man, with a basic income may benefit from the huge productivity gains through automation.\n  \n  \n   advertisement

That future dreams can come true turned out the more specific nature in the state of Pal-V. The Dutch company is eight years after founding the point (from 2018) are first sold-out series of 90 to be delivered from flying cars to its customers. Thereof will see some in Dutch airspace.