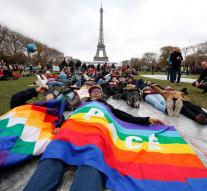 - Thousands of people have gathered in Paris to argue for more climate protection. She found that the objectives as they are ahead of the UN climate summit in the French capital, do not go far enough.

The protesters are at the foot of the Eiffel Tower. They carry banners with slogans such as " The system must change, not the climate " and " Je suis Climat ', by analogy with Je suis Charlie.