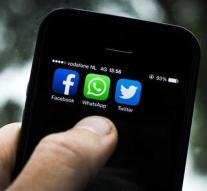 menlo park - WhatsApp has made a major change in a new beta version. From now on Android users can withdraw messages, and that up to a little over an hour after they have been sent.

The function to revoke messages existed since October last year, but until now was limited to the first seven minutes after sending. Android beta users who have installed WhatsApp version 2. 18. 69 will now have the 'Delete for Everyone' function at their disposal for 68 minutes and 16 seconds, while the function has been available for only seven minutes.

To use the function, both the sender and receiver (s) must have the latest version of WhatsApp on their device. For iOS users it is still a while, but there too the adjustments would be on the schedule. This is what Wabetainfo reports.