Home / World / Big Ben does not hit for four years 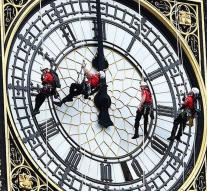 london - The London Big Ben is no longer heard for four years from next week on Monday. The reason for this is a grand renovation of the Elizabeth tower in which the 13.7 tons of heavy bell depends. The safety of the workers in the tower must be guaranteed.

The clock will only be heard until 2021 during major events like old and new.

Big Ben is actually the name for the heaviest of the five clocks in the 96-meter-high Elizabeth tower that lies on the Thames. In general, the whole tower is called so.

The Big Ben has been stopping for almost 157 years without interruption. Only in 2007 and between 1983 and 1985 the clock was due for renovation. Big Ben is probably named after the British builder and politician Sir Benjamin 'Ben' Hall (1802-1867).