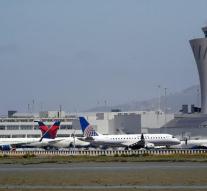 san francisco - The US Aviation Authorities investigate an incident over San Francisco Airport last Friday. An Air Canada plane landed almost on a taxiway (instead of the runway), where at that time four full passenger aircraft were ready for departure.

In the Air Canada plane there were 135 passengers and the device had green light to land. Suddenly the pilot positioned the plane above the paralel taxiway and put the landing in. At that time, the four passenger aircraft were ready for departure.

When the air traffic controller realized that the device was on the way to the taxiway, he called the pilot to stop the landing and try again. 'This could have been a serious mistake,' said Greg McConnell of the Canadian Federal Pilots Association against Global News. 'The aircraft on the taxiways also had green light to leave, so it's all very bad. '

In the last twenty years, 85 percent of aircraft accidents have been caused by a pilot's error, according to a National Transportation Board investigation. In this case, the surrounding geography around the airport could have played a role, said McConnell.

Despite the fact that taxiways and laneways are completely different, McConnell finds it difficult to land in the dark in San Francisco. 'I also flown there in the evening. It can be difficult to approach the landing there visually. '

The taxiways have a blue light as a mark, while the runway has a white light. But according to McConnell, the blue lights are not so bright and that's definitely awkward in the dark.

However, he can not accurately designate exactly what went wrong. 'There are too many questions at this near-megaramp. I do not know what happened and also do not know how Air Canada looks like it. That is what the FAA (US Aeronautics Bureau) will investigate. '