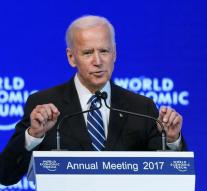 davos - Russia is the biggest threat to the international order. That said, the US Vice President Joe Biden on Wednesday in his last great speech. He said Washington should work with Europe in order to make a stand against Vladimir Putin.

Biden's speech in Davos, Switzerland, which currently takes place the World Economic Forum (WEF). In two days, Donald Trump sworn in as the new president of the United States. Trump has previously conciliatory signals delivered to Moscow. At the same time it seems to encourage the break-up of the European Union. He spoke highly of the departure of Britain from the union.

The Trump message gets a lot of criticism of Biden. He warned that Putin will likely try to influence the elections in Europe, such as Russia would have done in the US. 'Under President Putin, Russia is using every means necessary to cause cracks in the European project, to test the fault lines of Western countries and to return to a policy defined by spheres of influence. 'The elections in the Netherlands, Germany, France and Italy will no doubt try to influence Putin said Biden. 'And again, the goal is clear: to overthrow the liberal international order. '