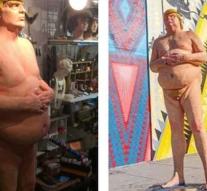 new jersey - A sculpture by a naked president Trump will be auctioned in May. Julien's Auctions mentions the auction 'The Emperor Has No Balls' and must be the showpiece at the New Jersey auction. It is estimated that some 20,000 to 30,000 dollars will be offered.

The statue belongs to the INDECLINE art collective from West Coast and was previously seen in New York, San Francisco, Los Angeles and Cleveland. This happened a few weeks before the US presidential elections of 2016.