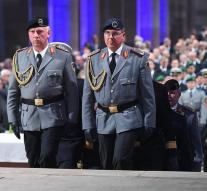 speyer/straatsburg - Europe has dignified farewell to German statesman Helmut Kohl, who played a key role in Germany's reunification, enlargement of the European Union and the introduction of the euro. Kohl was first given an official European funeral ceremony and his chest was placed under the European flag in the European Parliament.

Current and former leaders Kohl praised his vision and determination. Several leaders recalled his dislike of domination and his preference for cooperation. The Chancellor Angela Merkel from East Germany thanked Kohl humbly and said that her life, like that of millions, would have been very different without Kohl. Ex-President Bill Clinton of the US was visibly stirred and said, 'I just love that guy'.

The christian democrat Kohl from Ludwigshafen who died from the clutches died June 16 in his birthplace at the age of 87 years. He was buried in a closed circle on Saturday night at the cemetery of Speyer's cathedral. That was after the coffin was over the Rhine to Speyer and after a fog in the cathedral of that city.

There, the bishop of Speyer, Karl-Heinz Wiesemann also said goodbye to a husband and father of a human being with all that is in power and in weakness. Kohl had been hoping for years with his children after his second marriage in 2008.

The farewell of the man who helped Germany and Europe united was overshadowed on Saturday by that bitter division. German media reported that the two sons of Kohl, Walter and Peter, like his granddaughters and grandchildren, were not at the funeral in Speyer. The sons are children from Kohls marriage to Hannelore Kohl-Renner (1933-2001). Merkel reminded her of her speech as 'the woman who was always on Kohls's side in good and bad times'. But she also praises widow, Maike Kohl-Richter, Kohls 35 years younger second wife.