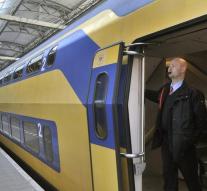 amsterdam - In collaboration with ProRail, NS launches a new information system for train drivers, which allow a faster flow of rail traffic.

,, The track can be used and to avoid delays or unexpected shutdowns. Rail passengers also get more information about delays, 'said NS driver Audry Wiltink.

He is closely involved in the development of the automatic application of ProRail, which is in direct contact with the control center.,, We will thus drive more often on time, 'said Wiltink.