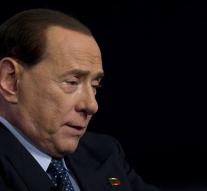 - The Italian former Prime Minister Silvio Berlusconi on Tuesday at a hospital in Milan went under the knife for open heart surgery. During the surgery, which doctors have allocated four hours, he gets a new aortic valve.

On Facebook, wrote the 79-year-old Monday:,, Of course I am concerned, but I feel very comforted me through the expressions of affection and support that have come from many quarters, including from my so-called political enemies. ''