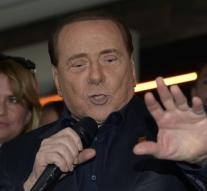 - The open heart surgery at the former Italian Prime Minister Silvio Berlusconi in Milan on Tuesday in a hospital without any complications.

That the Italian news agency Ansa reported citing sources within the hospital, the San Raffaele Hospital.

Berlusconi received during the approximately four-hour operation a new aortic valve. The former prime minister was last week treated three times in the hospital because of malfunctioning valve.


On Facebook, wrote the 79-year-old Monday:,, Of course I am concerned, but I feel very comforted me through the expressions of affection and support that have come from many quarters, including from my so-called political enemies. ''