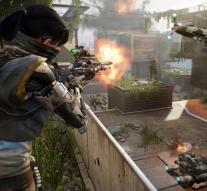 - The German Interior Minister, Thomas de Maiziere, quickly wants a debate about the dangers of extremely violent computer games that are in circulation. Following the shooting Friday in a shopping center in Munich, where an eighteen year old student randomly shot and killed nine people.

According to Hermann Utz Police in the Bavarian capital,, moved the offender is like in a computer game. '' The killings seemed copied from certain games. Several victims were executed with shots in the head, police said.