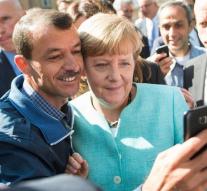 
This makes the procedure for refugees from Syria and some other countries considerably longer. The Federal Migration Office will a decision be taken, first keeping the origin, the escape and the training of the asylum seeker to the light.
In principle this is a normal state of affairs, but that was since the end of 2014 no longer applied to people who probably come from Syria and some other countries. The flow of refugees was so great that there was a rapid procedure for people from these countries. They would probably still allowed. Thereby lapsed as personal interviews with candidates and actually got a Syrian virtually automatic asylum.
NEW