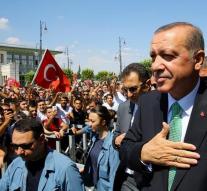 - In talks with Turkey on accession to the European Union is inconceivable under the present circumstances there is broached a new chapter. The reaction of the Turkish government on the attempted coup of last weekend will not let me. This said a German government spokesman Friday on the negotiations began in 2005.

Which expire in stages whereby each different subjects are on the table in so-called chapters. At that time there were appointed 35 chapters, of which only fourteen are treated and one was completed. The spokesman did not comment on a possible rupture with Turkey. That's not a German but a matter of the EU, he said.

He criticized suspects displayed with injuries or be humiliated in front of the cameras. The Turkish government should take in response to the failed coup on the rule of law, according to Berlin. The leader of the Christian Democrats in Bavaria (CSU), Horst Seehofer, the EU has called to suspend talks with Ankara. CSU reigns in Berlin with Chancellor Angela Merkel (CDU).