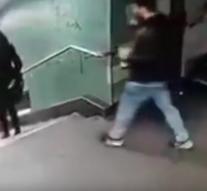 berlin - The 27-year-old Bulgarian man was arrested Saturday because he end of October in Berlin subway kicked a woman down the stairs, Sunday is already before the courts. That says a spokesman for the prosecutor in Berlin.

The incident was filmed by a surveillance camera, leading to social media quickly to emotional reactions in Germany and abroad. The 26-year-old woman broke her wrist during her fall. The perpetrator, who had kicked the woman from behind, then calmly strolled away with a few friends without worrying about the woman.

Wednesday, police announced that it has established the identity of the man. He was held Saturday in a bus from France, who arrived in Berlin's Charlottenburg station.

According to the spokesman of the public will also consider whether the man attempt to be accused homicide.

Last Monday, the younger brother of the perpetrator was arrested, but he was released because there was no evidence of complicity.