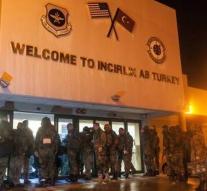 berlin - Following a new refusal by Turkey to allow German parliamentarians to join the air force base Incirlik, the government in Berlin is considering withdrawing German troops that are in NATO.

For the German government, it is 'absolutely unacceptable' that public representatives can not see how the troops are happening, said a spokesman for the Foreign Ministry in Berlin. '

Turkey told the German government on Saturday that parliamentarians are not welcome. As a matter of fact, Turkey called the German decision to grant Turkish officers asylum. Last year, German politicians were rescued by Turkey after the Bundestag had adopted a statement stating the massacre on Armenians in 1915 as genocide.

The commitment of German soldiers abroad must always be approved by parliament in Germany. That is why the government and the Bundesdag adhere to the right of delegates to visit the military.