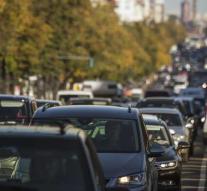 berlin - The popular diesel engine is, after Hamburg and Frankfurt, also in the German capital under the spell. A court in Berlin ruled Tuesday that only the air quality in the metropolis will improve. Around two hundred thousand motorists with cars up to the Euro 5 standard are affected.

The case was filed by environmental club Deutsche Umwelt-Hilfe (DUH). It had already revealed the worldwide diesel scandal, which showed that powerful car companies such as VW, Mercedes and Audi had fumigated on a large scale with the emission of exhaust fumes. The affair costs them billions of euros in fines, trade-offs and software updates.

'The German car industry lied and deceived in the reduction of exhaust fumes', Angela Merkel ceased this week at the youth department of her CDU party. As a result, ex-Volkswagen boss Winterkorn has been sued. Former Audi chef Stadler is even in prison. 'They have lost our trust and are guilty,' according to the chancellor.

On 11 major Berlin streets, the emission of harmful nitrogen dioxide is too high, the judge ruled. This concerns traffic arteries such as the Straße des 17. Juni, between the Brandenburg Gate and the monumental Victory Column. Or the busy Leipziger Straße between Potsdamer Platz and Alexanderplatz. There must be a diesel ban until next year.

Because the senate of the city-state of Berlin has so far done little to improve air quality, the judges intervened. The Spree city still has six months to come up with a plan for improvements. And three months later the ban must have been implemented.

In the metropolis city of Berlin, the officials have designated a few streets, where only 30 km / h may be driven. However, the maximum speed is hardly checked. The fine for violating the forthcoming diesel ban will be 25 euros.

DUH is delighted: 'This is a good day for healthy air', says director Hans-Jürgen Resch.