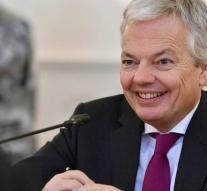 brussels - The Benelux, the partnership between the Netherlands, Belgium and Luxembourg that celebrates its 60th anniversary this year, still has plenty of plans for the future. The Heads of State, Prime Ministers and Ministers of Foreign Affairs of the three countries meet in Brussels Tuesday to look back and look ahead. Despite the somewhat old-fashioned image, the Netherlands sees the Benelux as 'more relevant than ever'.

' We have an ambitious agenda to continue to play a pioneering role as a laboratory of the European Union '', said the Belgian minister Didier Reynders when he took over from the Netherlands in January. In areas such as digitization, intelligent transport systems, the circular economy, energy transition and combating social dumping, the Benelux can be a testing ground for the EU, according to the minister.

In recent years, the countries have made agreements in many areas. For example, police officers may pursue criminals on each other's territory or interview suspects and his databases are easily accessible. The three countries also recognize each other's educational diplomas and carry out joint traffic checks. Furthermore, the Dutch and Belgian air forces protect the Benelux territory alternately.

There is also close collaboration to counter benefit and healthcare fraud and agreements have been made on matters such as nuclear safety, migration, cross-border healthcare and payment transactions. A trial with a digital consignment note for the transport sector has recently started.

The three prime ministers can replace each other if they are absent on EU summits. That happened twice. Rutte replaced his Luxembourg colleague Xavier Bettel at a summit in 2017. At the end of 2014, Bettel did the same for Rutte, who was then busy with a political fire in The Hague. 'Today I represented more than 16 million Dutch people. And 500,000 Luxembourgers, 'Bettel said afterwards.

The Benelux was founded in 1944 as a customs union in London by the three refugee governments. In 1958, the three countries signed a treaty for an economic union, and that is the official beginning. Fifty years later, a new treaty was signed in The Hague, which came into effect in 2010. Since then, the Benelux Union is spoken. The theme of the celebration is Tuesday 'A young and green Benelux'.