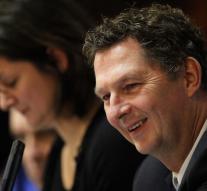 brussels - The Benelux Parliament gives way to the terrorist threat. The meeting has been moved from Brussels to Namur, where normally meets the Walloon parliament. That's parliament speaker Maya Detiège Wednesday.

In Brussels were parliamentarians from Belgium, Netherlands and Luxembourg, among other use of the parliament, city hall and hotels. In mutual consultation it was decided to divert.

The parliament of the Benelux meet alternately in one of the three countries. It is an institution that has no decision-making power. It was founded in 1955. Meetings are held every two years in a row in one of the three countries. The regular meeting cities are Brussels, The Hague and Luxembourg. Belgium and the Netherlands, each delivering 21 MPs and seven Luxembourg.