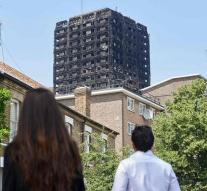 london - British artists released a number on Wednesday that is intended to raise funds for victims of the fatal fire at Grenfell Tower. Robbie Williams, The Who, James Blunt and other famous names documented the studio for the benefit song, a cover of the song Bridge Over Troubled Water.

Due to the fire in the London Tower, earlier this month, 79 people came to life. A number of survivors of the inferno contributed to the benefit song. They can be heard in the background choir.

The action was designed by music producer Simon Cowell. He called people via Twitter not only to buy the single but also to donate to organizations that help fire victims.