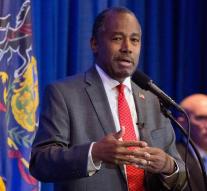 - Ben Carson has agreed to become part of the government of the elected US president Donald Trump. This was announced by the Wall Street Journal Wednesday, invoking a spokesman Carson.

The former neurosurgeon, who lost the race for the White House and thereafter up behind Trump, has accepted the ministerial post of Housing and Urban Development as a Republican candidate.