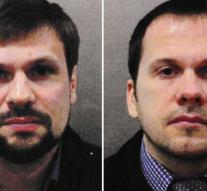 london - The journalistic research network Bellingcat says he has discovered the identity of 'Alexander Yevgenyevich Petrov', one of the two suspects in the Skripal case. It was about Aleksandr Yevgenyhich Mishkin, military doctor of the Russian military intelligence service GROe.

Bellingcat previously revealed the name of the other suspect: Colonel of the GROe Anatoli Tsjepiga. He pretended to be Roeslan Timurovich Bosjirov.

For the identification of Mishkin, Bellingcat used several open sources, statements from people close to the suspect and personal documents, including a scanned copy of his passport.

Misjkin was born in July 1979 in the village of Lojga in the district of Arkhangelsk in the north of Russia. Until September, his registered home address in Moscow was the same as the headquarters of GROe, according to Bellingcat.

Russian former spy Sergei Skripal and his daughter, who live in Salisbury, in England, became seriously ill at the beginning of March. They were found to have been affected with a nerve gas called novitsjok. They survived the attack. Britain thinks that the poisoning has been carried out by the two Russians.

Russia denies any involvement in the poisoning. The men told on Russian television that they flew to London as tourists and visited Salisbury to visit the cathedral.