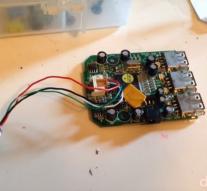 - Fourteen- year-old Ahmed Mohamed from Irving in Texas moved with his family to Qatar. He was " bell boy " baptized after he was arrested in mid-September with a homemade clock, which was by a teacher as a bomb. The Muslim boy was handcuffed removed by the police. A storm of protest in the United States and then in the rest of the world.

Tempers ran high after the father do report discrimination on grounds of religion. Soon the boy was called a genius. Ahmed met with a range of celebrities, President Obama in the White House first.

This was followed by, among others, Google founder Sergey Brin, the Turkish Prime Minister Ahmet Davutoglu, the Sudanese President Omar al-Bashir, Queen Rania of Jordan and Mark Zuckerberg of Facebook.

Everyone offered assistance to the Texan family. An offer from Qatar to the boy to follow a program for young inventors there is accepted. The whole family moved back to the emirate, as US media report.