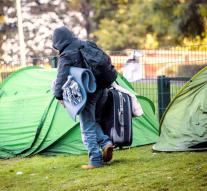 Netherlands was only willing to include refugee and registration for the arrival countries in order, emphasized Prime Minister Mark Rutte . Vice President of the European Commission Frans Timmermans already denounced Wednesday that so few EU countries have registered to take in refugees .

Until now, all alongside Sweden only Spain, Portugal , Finland, Germany and France have been willing to take in refugees . Belgian Prime Minister Charles Michel said Thursday ahead of the summit did not yet know when the group arrives in Belgium .