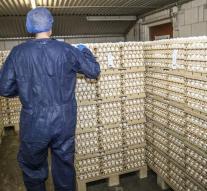 brussels - The Belgian state takes legal action against Chickfriend, the Dutch company that used the pesticide fipronil, which caused eggs to be infected.

Like in the Netherlands, eggs were taken out of Belgium and poultry companies closed. Belgium wants to report the damage to the responsible, report sources to Belgian media.

The fipronil served to help chickens from blood lice, but came into eggs that were exported to many countries. In some cases European standards were exceeded.

Both the Belgian and Dutch courts are investigating the matter. The forrest of the two Chickfriend drivers was extended by two weeks on Tuesday. They are stuck to suspicion of endangering public health. The Belgian supplier Poultry-Vision is also the subject of research.

The damage to the Dutch poultry sector is at least 150 million euros. In Belgium it is unclear how much the damage is. The Belgian government has announced measures to compensate diversified companies.