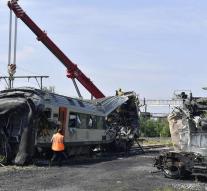 brussels - A train accident early last month in Belgium, three people were killed, was caused by the driver of one of the vehicles was distracted by his cell phone. That Belgian media reported Tuesday.

On June 5, crashed a passenger train and a freight train on display in Saint-Georges-sur-Meuse. Researchers found that the mobile phone of the driver of the passenger train at the time of the crash was active. The driver had also stated that he had seen two yellow warning signals for possible red signal. However, he did not brake. The driver came through the crash killed.

From a technical examination of railway manager Infrabel shows that everything functioned normally.