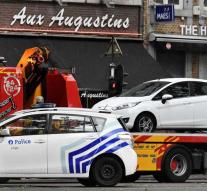 liege - At a number of places in Belgium, a minute's silence was observed Wednesday at 1:00 pm out of respect for the two police officers and the student who were shot dead in Liège on Tuesday. Political forces, politicians, administrators and citizens in cities such as Antwerp, Brussels and of course Liege also commemorated the victims.

At the Espace Tivoli in the center of Liège, Prime Minister Charles Michel, Minister of the Interior Jan Jambon and the Walloon Prime Minister Willy Borsus shake hands with members of the affected police force. Many people present wore a banner in the colors of the Belgian flag. 'Words fail,' Jambon said after signing the mourning register in Liege.

With many public buildings, the flag hangs half-mast. This is the case at the Antwerp City Hall until Sunday. The employees of Europol in The Hague also discussed the three victims.