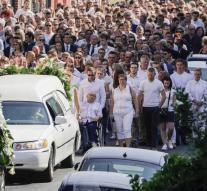 liege - Police officers, politicians, relatives and friends in Liege have paid the last honor to the two agents who were shot a week ago in the center of the Walloon city. Many hundreds of agents were present at the funeral in Liège.

At many police stations in Belgium the flags hang at half-mast. After a minute's silence, the police let the sirens roar. The Dutch police announced that they were going to live with 'on this sad day'.

Minister of the Interior Jan Jambon spoke of a 'heartbreaking' funeral. He awarded the two agents posthumously an award for courage and dedication.

The third victim of Benjamin Herman (31), the 22-year-old student Cyril Vangriecken, was buried on Monday. The shooter was on leave from prison when he attacked the agents and shot them with their service weapon. After a hostage, he wounded four more cops, after which the police shot him.

Herman is buried in private on Tuesday after a church service in Marche-en-Famenne, in the south of Belgium. He would have been converted to Islam, but his family did not see any signs of radicalization.