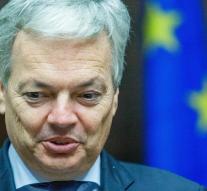 According to Defence Minister Steven Vandeput flew the last few days not a Belgian aircraft over the affected area. He said on the radio that fit the allegations in the Russian tactic to try to sow divisions within the anti-IS coalition led by the US. According to Russia Tuesday there are no Syrian or Russian air strikes because of a 'humanitarian pause'.