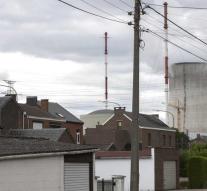 brussels - Belgium asks the neighboring countries whether they could come to the rescue in case there is a shortage of electricity this fall. Because in November only one of the seven Belgian nuclear reactors is active, it is possible that certain areas for short periods of the electricity grid must be achieved.

Minister Marie-Christine Marghem (Energy) said Monday at a press conference that she is contacting her colleagues in the Netherlands, France and Germany to ask if they have extra capacity in case of emergency.

Engie Electrabel, the owner of the two nuclear power stations in Doel and Tihange, reported on Friday that some reactors will remain stationary for longer because the recovery of concrete rot in bunkers takes much longer than expected. That could mean that a power shortage arises in November.

Marghem suggested, among other things, that an inactive gas-fired power plant in Vilvoorde would be able to cope with the problem. 'We still have a few weeks to find solutions. '

The minister criticized the energy company because, according to her, it communicated too late about the concrete problems. Electrabel is therefore also responsible for a possible electricity shortage. The minister is looking into whether it is taking legal action.