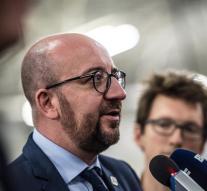 brussels - The Belgian government has cut more for 2017 than previously thought. Prime Minister Charles Michel assumed that 2.4 billion euros was enough to keep order on the budget for next year, but now the Planning Bureau has estimated that there is a shortage threatens 4.2 billion. Which announced the Flemish business daily De Tijd Thursday on its website.

The setbacks are more due to a less favorable economic development. Partly because of the upcoming brexit the predicted growth only 1.2 percent instead of 1.5. Tax result comes almost a billion less inside. The revenue from the VAT increase in electricity is overestimated.