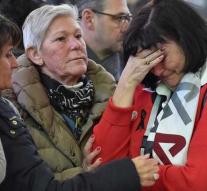 brussels - Survivors of the terrorist attack at Zaventem airport are deeply disappointed about the course of the commemoration this morning. At 7.58 am, exactly two years after the attack, a minute of silence would be held.

When the minute of silence began, however, it was unclear to those present. No announcement was made and the victims and survivors were kept at a distance from the memorial plate behind a ribbon. 'Suddenly we saw a door open and the government left,' says a VTM present.

'They are not spectators,' says Guillaume Denoix de Saint Marc, founder and director of a victim organization. 'It is their neighbors who have died. 'He says that Prime Minister Charles Michel also ignored the next of kin. 'He did not come to greet the families when he crossed them at the hotel. '

There was also a technical problem with the loudspeakers, causing a loud buzzing through the room. 'This could have been such a great moment,' says Danielle Iwens. She works at the airport, her colleague was killed two years ago in the attacks. 'I am very disappointed, this makes the grief even bigger. '