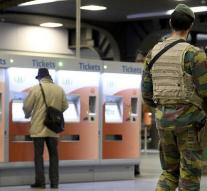 - Belgium is a 2018 travelers who want to monitor more closely in by bus, train or boat the country. Everyone should be registered. The country wants to prevent terrorists unhindered can come to Belgium, let Interior Minister Jambon know the Süddeutsche Zeitung.

The Belgians ask the Netherlands, Germany and France to join the initiative for stricter border controls. Anonymous buy a ticket, then past. The perpetrator of the recent attack in Berlin could also undisturbed traveling through Europe, as the Belgian minister cites.

This month Belgium hold talks with other European countries to discuss the plans. The European Commission has been informed and from Europe seem to be no objections to the plan.

Transport companies are less enthusiastic. They worry about long delays that may occur.

Belgium was hit in 2016 by two terrorist attacks: in Brussels and Zaventem Airport.