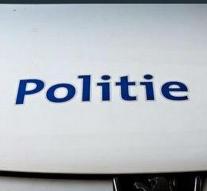 brussels - The Belgian justice is looking for at least one member of the terrorist cell whose Wednesday two members were arrested. The federal parquet will take into account that any terrorist plans are being speeded up.

The police arrested the brothers Akim and Khalid S. in the Brussels municipality of Anderlecht on Wednesday. These Belgians aged 37 and 40 are suspected of participating in a terrorist organization.

In a garage box were Kalashnikovs, a riot gun, small arms. Bulletproof vests, a floodlight, uniforms and ignition mechanisms. The terrorist cell would have advanced plans for an attack, but a precise date was probably not yet. A 42-year-old suspect was arrested in France.

The two are Said S.'s brothers, a member of the Motorcycle Kamikaze Riders who were convicted in October of 6 years for terrorism.

The perpetrators of the March bombing in Brussels accelerated their action after trawlers were arrested. 'We can not exclude that risk now,' said a parole spokeswoman.