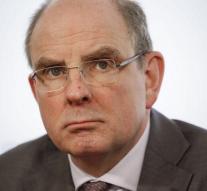 brussels - The bankruptcy of 158 Belgian terrorists fighting in jihadist territories in Syria and Iraq will be frozen. That has been decided by the Belgian government on Friday. The total is 211. Several people on the list have probably already been killed.

'By drying the Syrian warriors' money, they can not use their resources for terrorist acts in Syria or in Europe,' said Justice Minister Koen Geens. In addition, it will be harder for them to return to Europe.

'It goes without saying that the fight against terrorism must also be conducted on a financial basis,' added Minister of Finance Johan Van Overtveldt.