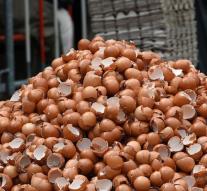 brussels - The Belgian federal food agency FAVV has found a trace of the poisonous pesticide fipronil dating from September 2016.

The watchdog analyzed poultry farms that were taken for egg shedding.

For the first time it appears that the use of the drug in the poultry sector came to light for the first time in November 2016 in the Netherlands. As long as there are already infected eggs, it is still unclear. A tip warner warned the Dutch Food and Welfare Authority (NVWA) in November. It only took action in July after Belgium had reported that fipronil was shown in eggs.

The pesticide was detected in one of fourteen historic languages, FAVV director Herman Diricks said in the Belgian parliament. The risk threshold was not exceeded and public health has never been at risk, according to Diricks.

Fipronil was illegally added by the Dutch company Chickfriend to a means of killing blood lice in chicken stables. The spoiler came from the Belgian supplier Poultry-Vision. Both companies are subject of judicial research.

The FAVV knew of egg contamination since early June of this year, but did not alarm because of low concentrations. However, information was requested from the NVWA about Chickfriend. The NVWA had not given warning after the November tip because there was 'no acute threat to public health.' '