Home / World / Belgium: Dutch eggs contaminated by the end of 2016 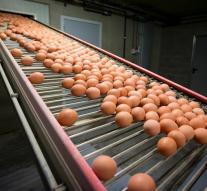 brussels - Already in November 2016 traces of toxic fipronil were found in Dutch eggs. That said the Belgian Minister Denis Ducarme (Agriculture) on Wednesday at an emergency meeting on the egg crisis in the Chamber of Commons for Agriculture in Brussels.

According to Ducarme, the Netherlands has also been waiting for too long to share information. The Belgian authorities had asked for the customer list of the Dutch company Chickfriend who cleaned chicken stalls with a pesticide containing fipronil. According to the minister, that took a month, which allowed the Federal Food Safety Authority (FAVV) Agency not to identify which poultry companies could possibly be infected in Belgium.

Both the Netherlands and Belgium are conducting judicial investigations into the companies involved in the poison scandal.